Much has been said in the local news recently about the impact of new planning developments on pre-existing businesses that produce noise. Often we hear of longstanding clubs or other similar venues that are either being forced to close, or are fearful of being forced to close, due to noise complaints from residents in new houses nearby.

To many, myself included, it doesn’t seem right that existing businesses that have existed for years should be subject to restrictions, fines and ultimately closure just because some new residents nearby object. Clearly we should be seeking to strike a balance between building new homes and communities, and protecting our existing businesses. 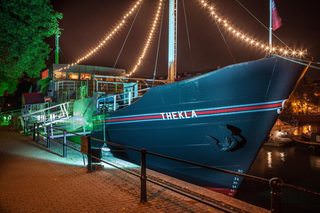 In Bristol the likes of Thekla and the Fleece are good examples of venues with new housing development nearby that may be threatened by this effect. But it’s not just limited to nightclubs and music venues, as I saw for myself at a recent Development Control (planning) committee. We were deciding on a new housing development on the waterfront, which was right next to a working boat yard that produces a lot of noise. Many of us on the committee shared the concern of the boat yard’s owner that the noise damping proposed for the new homes wouldn’t be enough to protect residents from the very loud work that goes on in the boatyard, with the new residents therefore likely to complain.

At the moment in the UK we don’t currently have any rules that stop new residents from making complaints about pre-existing neighbours, but in other countries they do. It’s called the Agent of Change principle. The Music Venue Trust explains it well:

This means that an apartment block to be built near an established live music venue would have to pay for soundproofing, while a live music venue opening in a residential area would be responsible for the costs. A resident who moves next door to a music venue would, in law, be assessed as having made that decision understanding that there’s going to be some music noise, and a music venue that buys a new PA would be expected to carry out tests to make sure its noise emissions don’t increase.

At the moment, UK law says that whoever is making a nuisance is always responsible for that nuisance. How long it has existed, whether there were any historic instances of the same noise being a nuisance, if somebody moved right next door to the noise and decided it was a nuisance, these are all, unbelievably, currently irrelevant to British law. If a noise exists, you can deliberately move next to it and demand it be turned off and UK law will support you. You can build balsawood huts next door to a music venue and simply wait for your residents to complain and the venue will have to pay all the costs to reduce their noise.

Music Venues are in the frontline of the impact of our current laws, with an avalanche of cases potentially closing down music across the UK. But these are not the only community activities under attack.

Complaints have been made against church bells, a new development next to a speedway race track where the residents don’t like the sound of the bikes, the brand new build next to a farm where the sheep are now, according to British law, too loud and a nuisance. Community activities and cultural activities across the UK are under threat -; Music Venues are just the first affected.

Agent of Change has been trialled and tested in Australia and it works; better planning, better developments, people thinking about what exists where they want to live and how they will live with it, music venues and others thinking more about their neighbours.

I think introducing Agent of Change makes perfect sense, and it’s great to see Labour leading the way on this. A backbench bill is progressing through parliament, sponsored by Bristol East MP Kerry McCarthy, and Sadiq Khan is proposing to introduce it in London.

At yesterday’s Full Council meeting of all councillors and the mayor, I asked Mayor Marvin Rees about the subject, and he promised to try and introduce Agent of Change in Bristol. This is great news, and will hopefully protect some of our valued businesses and venues whilst promoting sustainable new housing.

My full question to Marvin, and his response, are below: 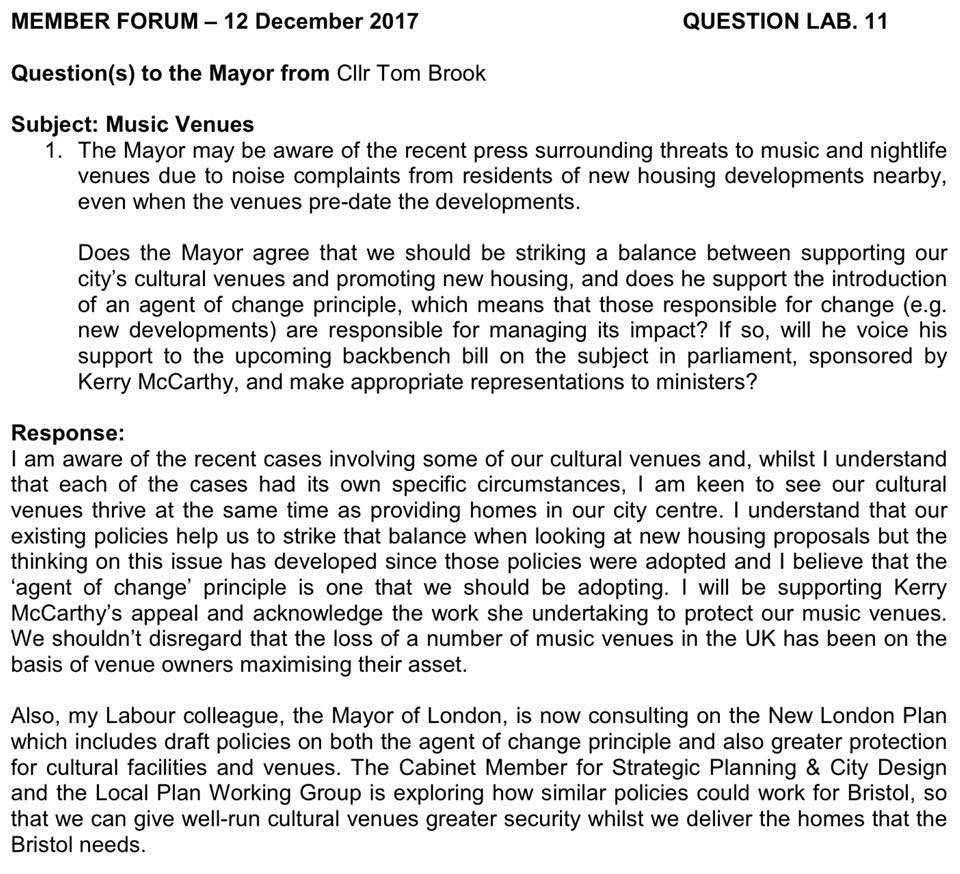