I’ve had a lot of contact recently with residents promoting the conversion of Bristol’s streets to Light Emitting Diodes (LEDs).

Replacing the street lights with LEDs would help to save the council money, and help the environment at the same time. The city’s street lighting results in emissions of around 6,000 tonnes of CO2 per year, about fifth of the council’s total carbon emissions. Using the latest technology would greatly reduce this figure, and save money in the process. So there is a clear argument to replace our street lights.

At a recent Cabinet meeting, I asked what progress the council had made towards replacing its street lights with LEDs. The cabinet member informed me that the council has been replacing street lights with LEDs as and when lights needed replacing, but that some programmes are in the pipeline to replace more lights across the city. It’s also worth noting that, by avoiding a large roll out over recent years, going forward we will benefit from better LED technology that will save even more energy once they’re installed. 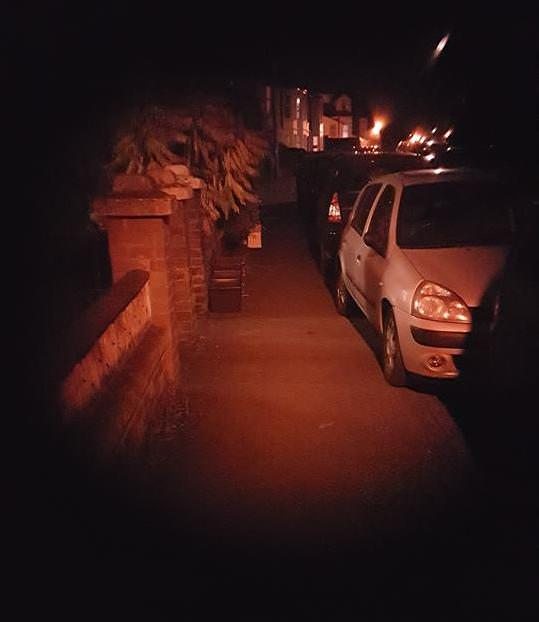 Whilst reducing financial costs and carbon emissions are great reasons to convert our street lights to LEDs, there’s another reason that’s often overlooked. I was recently given a tour around some local streets by a resident with Retinitis Pigmentosa, a condition which results in tunnel vision. Using simulation glasses, we were able to experience what it’s like to walk the streets at night with a visual impairment. Objects in the way become much harder to see, especially if they’re in the corner of one’s eye like a parked car or a recycling box. The difference between a well-lit street and a poorly-lit one becomes all too obvious. Imagine the photo on the right being all you can see when walking the streets at night.

The light that comes from LED street lights is much brighter, focused and is a more natural white colour, as opposed to the orange glow that older lamps give off. This can make a world of difference for someone with a visual impairment, helping them to navigate the streets at night much more safely.

So clearly there are multiple benefits from replacing the city’s street lights with LEDs, and I’m happy to see that some programmes are in the works to replace more of Bristol’s street lights over the coming years.