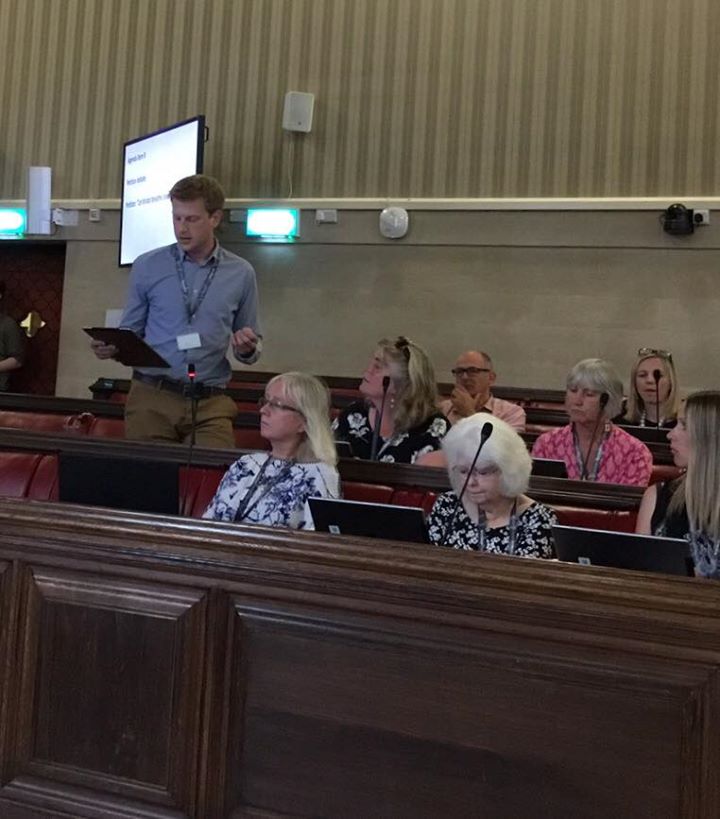 On Tuesday, at our Full Council meeting of all Councillors and the Mayor, we debated a public petition to improve air quality in Bristol. The Bristol Labour party has long been a leading voice against air pollution in our city, and it’s similarly something that I take a keen interest in.

In the debate I spoke on behalf of the Labour group, and laid out some of the key challenges and opportunities at hand. Later in the meeting, Mayor Rees and Councillor Mhairi Threlfall spoke on some of the measures that this Labour city administration is putting into place to combat the issue.

I think it’s vitally important that we, as a city, country and planet tackle this invisible killer. Too many people die or fall ill because of air pollution -; we simply must take action and I am heartened by the measures Bristol’s Labour administration is putting in place to do so.

You can re-watch the discussion here, and the text of my speech is below:

Thank you Lord Mayor. In 1952, our country experienced one of the worst and most deadly disasters in its history. This wasn’t an epidemic or a famine or any of the other types of disaster that have happened through the ages. This disaster came from the very air itself. I’m talking of course about the Great Smog of London.

12,000 people were killed in the smog, with another 200,000 injured. And in response, the Clean Air Act was born. The Act changed the state of air quality in the UK. But, as we know, that is not the end of the story. Indeed, it’s probably only the beginning.

Annually across the world, 3.7 million people die prematurely due to air pollution. That’s over 300 Great Smogs. 40,000 of these deaths are in the UK, and 300 in Bristol. As the petition points out, 300 is a huge figure compared to the 9 people who lose their lives in road traffic accidents per year.

The majority of the pollution comes from road transport. That’s why measures to tackle road pollution, such as the Clean Air Zone that the petition calls for and that the Council is so vigorously pursuing, are so important.

Now vehicles are the main issue at hand, but we mustn’t forget other sources too – especially the industrial centres that produce so much pollution. Indeed for Nitrogen Dioxide concentration the worst place in the city is not the centre but parts of Avonmouth. Locals in this area, which is vital to Bristol’s economy, often experience odd smells – one wonders what they’re breathing in.

So, 65 years since the Clean Air Act and our efforts as a nation on air pollution are still not up to scratch. Indeed this Conservative government has had to be taken to court over its substandard and frankly disastrous Air Quality Plan, which has the cheek to suggest that Councils should take the lead in reducing air pollution whilst simultaneously continuing with stinging budget cuts that hinder us in doing so.

So in the meantime, before Labour brings in a true Greenest Government Ever, with a stalled national policy and disinterested national government it, like in so many other areas, falls to Local Government to take the initiative and to innovate for the good of the nation.

That’s why the measures this petition suggests, along with the policies this administration is already putting in place, are so important. They are all vital to cleaning up our city’s air, and I am proud that this Labour administration is taking such wide-reaching action on the subject. I am also heartened to see so many citizens of Bristol engaged and concerned about this important issue. I want to congratulate the organisers on such a successful petition – clearly there is a public will, as well as a political one, to improve air quality in Bristol.

Now personally I don’t think these measures will be enough. But surely something is better than nothing, and this is a foundation on which to build.

So the Labour Group wholeheartedly supports the petition, and will continue to pursue clean air for Bristol. After all, to quote Labour’s 2017 manifesto, investing in our environment is investing in our future.