Lesley Mansell and Labour – Winning the Best for the West

On Thursday May 4th, voters across the West of England will elect a new Metro Mayor. In this blog post I want to lay out what the Metro Mayor is and why Lesley Mansell, Labour’s candidate, is the best woman for the job.

Why is devolution coming to the West of England?

Central government has an agenda of devolution of powers to English regions, grouped together in what’s known as Combined Authorities. For our area this is the “West of England”, comprising of Bristol, South Gloucestershire, Bath and North East Somerset.

It is worth noting that all of these powers are newly passed down from central government -; no powers have been passed up from the local Councils, who will still be doing everything they are already doing.

What is a Metro Mayor?

The Metro Mayor role was a condition of granting this devolution, by adding a level of political accountability. The new Metro Mayor will effectively be the Chair of the Combined Authority.  They will work collaboratively with the local Council leaders on improving the economy, housing, transport and employment in the region.

But why do we need a Metro Mayor? The position is intended to take the accountability of the new money and powers. The deal given to us by central government at the moment is only the first stage of devolution -; to get further stages they want us to show we can have a leader (such as Lesley, see below) that will deliver. But there’s a strong argument to say we don’t need a Metro Mayor within devolution and that it adds another layer of bureaucracy. Utimately the devolution offer from Westminster was an all or nothing affair -; either take the £30m a year cash injection and new powers plus the Metro Mayor, or have nothing at all. Councillors across the region agreed that the deal would be of great benefit to the region despite any drawbacks -; as Marvin put it “it’s the only game in town.”

Who is Lesley Mansell? 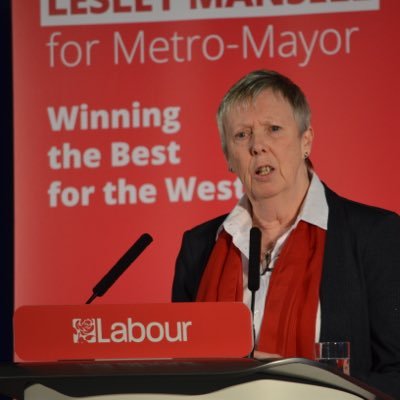 Lesley Mansell is Labour’s candidate to be the West of England Metro Mayor. She is an experienced local councillor who works for the NHS, and has years of the management and coordination experience that are so important to the Metro Mayor role.

What are Lesley’s pledges?

Lesley said: “Devolution presents an opportunity for us to tackle the inequalities of our housing market, the insecurity of our jobs market and to end the frustrations of our daily commutes.

“I will encourage investment in our region, working with the business community to build on the opportunities our economic prosperity provides.

“I want to do things differently, to ensure the West of England works for everyone.

“My key pledges are:

“The West of England is an inspiring place to live and work. My vision is to ensure everyone in Bath & North East Somerset, Bristol and South Gloucestershire can share equally in our region’s success. I will use my skills, knowledge and experience as a negotiator to bring together the leaders of the three local authorities. Sharing best practice, uniting in a common purpose, we will leave no one behind. I will bring co-operative values, equality and equity to all our decision making.

“I will be a champion for everyone in the West of England.”

How can I find out more information?

Finally, you can always contact me with any questions: tomforbishopston[at]outlook.com (replace [at] with @)