Anyone who has been remotely near Bishopston & Ashley Down in the past few weeks will have noticed an addition to the local skyline; the new floodlights at the County Cricket Ground. The new lights have courted disbelief from some residents as to their size and visual impact, and the testing that took place last week has galvanised this concern.

The Cricket Club’s position is that having the lights ensures the future viability of the Club, allowing them to host international games. Many residents in the area would agree that, despite this and other problems surrounding the Club, having the cricket ground in our midst is an asset to our local community, just as the Memorial Stadium is for those a little way up the road.

However, it’s concerning that the Club didn’t install retractable lights, or ones which are less bright. Local residents were (and are!) extremely vocal, but there seems to have been a democratic deficit here; residents’ views have not been wholly represented by the elected, and non-elected, officials in the Council. If they had, the Club could have been forced to think again about mitigation measures. 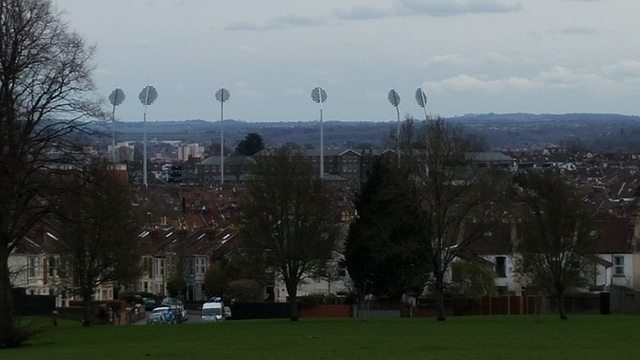 Despite some concessions, the brightness that the lights were being tested at last week was hurting the eyes of some local residents, and was shining into homes. We hope that the results of the testing (due very soon) will show that the light levels should be reduced and that the directional aim of the lights should be improved as per the planning consent.

It’s also worth bearing in mind that the lights will generally be used at dusk to “top-up” the sunlight rather than to replace it, so it shouldn’t be as bright as we saw last week. We’ll have to wait and see how much of a difference that makes. Also, the lights are restricted to fifteen uses a year with some other requirements added on, and we should ensure that there is no “mission creep” from this. One key issue at the moment is that the fifteen uses were supposed to be for professional games, whereas now the Club is proposing to use them for training/practice also. This is something they should be challenged on.

Overall, the lights are in situ now and won’t be going anywhere any time soon. Therefore the community and the Cricket Club need to work together going forward. This should be in tandem with working towards solving other issues the community faces surrounding the Club, for example parking. The Cricket Club can be a real asset to the local area and to Bristol as a whole, but this should not be at the expense of local residents. All parties can and should work together to reach an amicable solution, and if elected as your Councillors in May, Tom and David will support that every step of the way.