What’s the deal with the junior doctors’ strike?

We hear a lot of people concerned that they don’t know much about the junior doctors’ strike. So what’s the deal?

The government wants to move to what they call a “7-day NHS” (completely ignoring the fact that for the most part our NHS already does operate 7 days a week!). Regardless, the principle behind the government’s concept is that operations and procedures normally saved for the usual working week will also be conducted at other times. And there is also an argument about weekend mortality rates. However, there has been some discussion about the massaging of the figures by government officials to support this rationale, which is deemed by most to be unfounded and misleading. 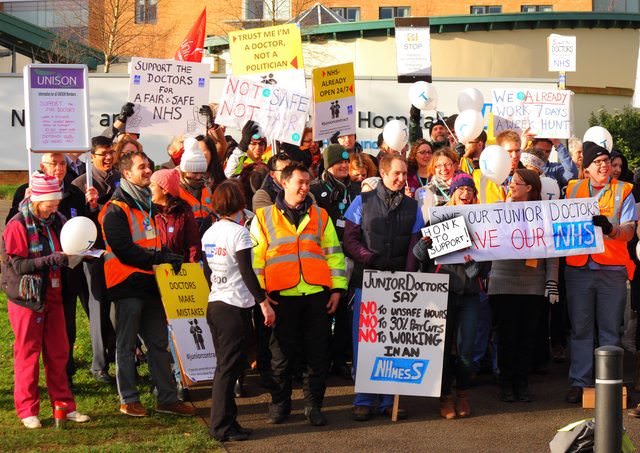 Rather than hiring more doctors to achieve the government’s aim, which many argue is the real solution, a new contract has been devised for junior doctors. The proposals include reducing higher rates of pay received for working evenings and weekends, and changes in working patterns. The government claims that “No junior doctor working within the current limits will receive a pay cut compared to their current contract.” The doctors vehemently dispute this.

So what’s wrong with what the government is proposing aside from the pay issue? Well firstly, this is being imposed on the junior doctors and they will have no choice. That’s an extremely illiberal move going against the doctors’ labour rights. Furthermore, the doctors are concerned that they will be forced to work longer hours, and will lose control of when they work. Ever-changing work routines are big contributors to fatigue and stress, and these doctors are in charge of saving lives -; we need to ensure their wellbeing is considered as part of the contract negotiations, as it’s looking a lot like just another cost cutting exercise. And ultimately, if the doctors are stressed, tired and fatigued, they will make mistakes through no fault of their own. That will put lives at risk and simply must not be allowed.