I spent some of yesterday talking to fellow Bishopston & Ashley Down residents about the Tax Credits cut and what it means for them. Despite the rain and cold we managed to distribute hundreds of leaflets and talk to many people who were concerned about the cut to Tax Credits that the government is handing down.

During the election the Tories promised to be on the side of working families, including David Cameron going to the length of promising outright on the pre-election Question Time special that he would not reduce Tax Credits. Well now he has certainly broken that promise, and more than 3 million working families will be on average £1,300 worse off next year as a result (as calculated by the House of Commons Library). 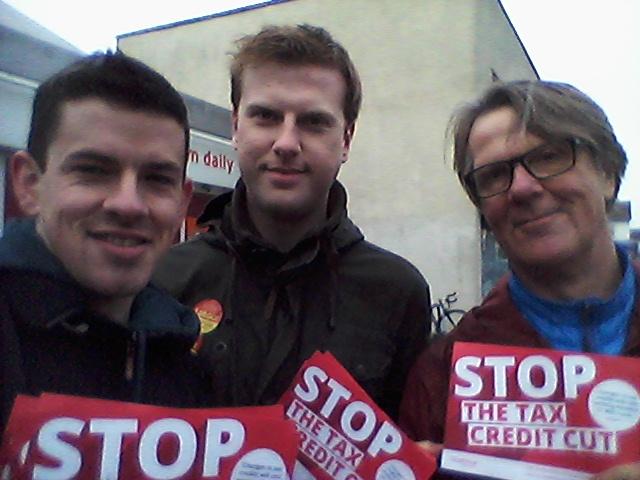 Furthermore, there are no planned transitional changes to protect affected families. 2.7 million families across the country will be left out of pocket, and there is a real risk that children will suffer directly as a result of the cut.

There is no doubt that the national books need to be balanced, but that should not be on the backs of the less well off in our society, and the finances of hard working families should not be adversely affected by the mistakes of the richest handful of people.

But what about raising wages to compensate, as the Tories are claiming? The government has announced a so-called “National Living Wage”, but this is notably lower than the real Living Wage calculated by the Living Wage Foundation. The government is claiming that this fake “Living Wage” will compensate for the Tax Credit cut, but the Institute for Fiscal Studies has stated the obvious here and has said that this is “arithmetically impossible”.

As a final statistic for you, The Resolution Foundation has found that all the tax and benefit changes in the government’s summer budget will push 200,000 children into poverty next year. This is utterly appalling.

So what can you do to help? Labour has launched a campaign to call on the government to stop the Tax Credit cut. You can sign it at www.labour.org.uk/taxcredits. You can also lobby your MP to oppose the cut (if they don’t already oppose it that is!). And finally, if you want to know more about campaigning with Labour against the cut (and all of the Tories’ other ideologically-driven policies), then volunteer through our website http://www.bishopstonlabour.org.uk/volunteer or email me at tomforbishopston@outlook.com.